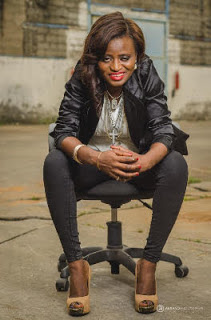 Introducing a brand new flavor whose name is already resounding in the ears of many as she has already shared the stage with many big names in the Gospel world, including the world famous stage of Believer’s LoveWorld at event like LFMA, IMC, Christmas Carols with Pastor Chris, as well as appearances on LoveWorld Plus; here comes, the Gospel reggae queen… SPECIAL AGENT SNYPA!!! Ready to take the music industry by storm!

Born in Bauchi State, Northern Nigeria to business woman Maria Samuel Jimoh Yusuf and Army officer, Samuel Jimoh Yusuf, gospel sensation Grace Farida Samuel (Special Agent Snypa) was the seventh of seven siblings in a household that was music inspired. In her early years, she attended ECWA Primary School, Rukuba, Jos, Plateau State, and Jubilee Modern Grammar School, Orile, Lagos State before proceeding to Onabisi Onabanjo University to study Mass Communications.
She discovered her talents for singing at an early age when her father was posted to Lagos during his military service. Her brother coined the name “Snypa” during a musical session they had together, as he was at that time “bringing her up” in music. She grew up having a fancy for reggae music, Bob Marley and the dancehall queen Patra were artistes she modeled her music after.

Snypa released a single titled “Get on Point” in the year 2010. She has also featured on various songs which include Bigiano’s remix of Shayo, which featured artistes like Vector the Viper, Ill Bliss and General Pype, the late Keffe’s remix of Pure Water which featured General Pype.
After listening to the man of God Pastor Chris and committing her life to the Gospel of Jesus Christ, Snypa crossed over to the Gospel music, using reggae as a tool to win and inspire souls to God’s Kingdom.

Special Agent Snypa is set to drop a brand new single from her debut album next week!!! The single is titled “High Grade”.

So get ready to be blown away by this amazing multi-talented young lady as she takes you to a whole other level in Gospel Reggae Music!!!