Sensational Gospel artist Fortune Ebel drops his debut album titled “I Rule” , the Gospel crooner currently serving as a lead psalmist in House on The Rock, Lagos, is really proving to be a cosmopolitan lyricist/singer indeed. Squashing the chestnut that says “think outside the box”, Fortune says “there’s box in the first place because God neither made nor put us in one”.

“I Rule” is a 12 track album with songs of extreme praise like “Raise You High” , “Na My Day” , songs that will lift you into praise and dancing. This album also featured other Gospel artistes like DannieLove and Blessal. 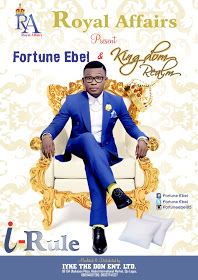 Fortune Ebel is a trained singer and he is into the Gospel music full time. He hails from Uzere in the Isoko South Local Government Area of Delta State, Nigeria and he is the fifth child amongst seven children. He has been singing for well over a decade as a backup singer and this he did for many lead singers – the most recent being for the Ron Kenoly Brothers when they visited Nigeria in December, 2012.

Officially, he commenced his exclusive music ministry/career on Sunday, the 18th of March, 2012 and he leads a group of young, talented and willing personnel who make up the Team-Melody City (MC) & Kingdom Realm (KR) – both of which he was inspired to create.

MC is the music label while KR is the name of the Crew that minister directly on stage. They have so far recorded few songs, some of which are currently on the MTN and GLO caller tunes bouquet in Nigeria.

As a trained singer and lyricist, he describes the pattern of his music as “simply cosmopolitan”. He writes/composes new songs as well as sings the old ones because he believes that most of the old songs guide the writer who writes new ones to retain the message of the Gospel, while the new songs breathe renewal on the old ones.

He is a Gospel music singer who loves and has a great measure of respect for the plethora Gospel music ministers that are both in Nigeria and abroad and together with his team, he has a vision to add to the Universal Church, songs that shall become legacies for many generations to come.
0 237
Share FacebookWhatsAppPinterestLinkedinFacebook MessengerTwitterReddItTumblrTelegramEmailStumbleUponVKDiggLINEViberPrintOK.ru