“This an early Christmas gift from me to you. This song was first produced jokingly in my mum’s kitchen two years ago after the birth of my boys. My HOD Emmanuel Okolie aka Mc. Notindomi played the keyboard right there in the kitchen. I wanted to tell an idyllic story about the birth of our King. A story that is still relevant today, because our King lives forever. His birth was divinely orchestrated to restore man back to God. I wanted to paint a story of His birth that I could sing to my kids during bedtime, a story that speaks about the God we love and have choosen to serve. To everyone who has been a part of this journey I say a big thank. Especially to my best friend, mentor, teacher, destiny partner, Pastor and husband- Femi Luther-Abegunde.” ~ El-Woma .


The song was produced by Mr. Wols of Greenland Music and the video was directed by the prolific director Sunny Peters.
DOWNLOAD AUDIO
DOWNLOAD VIDEO

Ewoma Luther-Abegunde whose stage is El-Woma is an award winning Gospel soul jazz singer. She released her debut album “POSSIBILITY” in 2012 with songs such as “What Manner of Love” , a wedding song titled “Aloor” and the soft rock song “Dry Bones” . The year 2015 has been a journey for her and she is grateful to the Almighty God for bringing her thus far. She released two singles this year- “Unforgiveness” a song based on the award winning movie – “Tempting Fate” which was released in cinemas nationwide on the 17th of July and “No One” an upbeat tempo song that speaks about making your boast in the Lord and having the confidence that if God be for you indeed no one can be against you. El-Woma is passionate about giving hope to lives as evidently seen when she is ministering through songs, writings or acting on stage. Last year, she released a Christmas song titled “A King Is Born” to a rousing acceptance and massive air play during the festive season.

With a deep soul jazzy breathe, El-Woma tells the story of the Messiah who came and brought redemption to mankind. She paints the story of His birth with musical notes and orchestration that penetrates the soul, indeed this song takes us back to that beautiful night our Savior and King was born. This song made it to the top 10 Gospel songs released last year and the song is such that even after the Christmas season it is still a blessing to listeners. El-Woma is set to release the visuals to this song during this festive season. “A King is Born” was produced by the award winning music masetro,
Wole Adesanya aka Mr. Wols of Greenland Music. 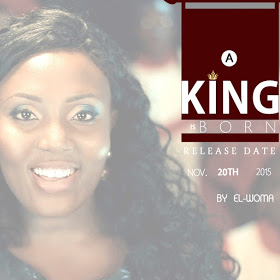 Aside from music El-Woma has a background in film production and theatre, she loves directing and writing as evidently seen in stage plays she has put together via the years- “The Advocate” , “Kukuje Land”, “Christmas In Lagos” , “Modern Woman” , “I Love My Country” and much more, her write ups on Facebook known as “TOTS FROM THE DIARY OF MY HEART” is one platform she uses to express her tots ranging from music, the Word, and things happening around her.

She partners with “Inspirational Sisters” in CornerStone Youth Church, with the aim of inspiring not just themselves but lives around. One of her favorite scripture is “with God all things are possible”. Close friends refer to her as “Possibility Mama” . She loves God with all her heart and that’s why she loves saying “We are repping God all the way” . El-Woma is witty, bubbling, a mixture of an extrovert/introvert, daring, creative, passionate and innovative. She is the CEO of Dove Essence Music, a platform used to express all that God has inhaled in her.

Ewoma is blissfully married to her best friend, mentor and kingdom partner Femi aka Bunnypie and they are blessed with two boys who keeps adding colors to their lives daily.
0 217
Share FacebookWhatsAppPinterestLinkedinFacebook MessengerTwitterReddItTumblrTelegramEmailStumbleUponVKDiggLINEViberPrintOK.ru