Beautiful visual expression for the song that depicts the supremacy of the Most High, Event Manager and Gospel singer Laureche curtailed no holds barred as she employs the expertise of Ajayi Scenelock Films for the video of the song “You Reign”.
“You Reign” is off Laureche’s debut album “More than Enough” and it is the 2nd official release off the album. Earlier this year, she released the video for the hit single “Izurukeme” off the same album. The scenery captured in “You Reign” – the video – expresses the Almightiness of the God who reigns supreme.
Uche Laura Etiaba, (popularly known as Laureche) spent her early years in Port Harcourt. A graduate of Nnamdi Azikiwe University Awka, Anambra State who majored in Metallurgical and Materials Engineering, she worked in an Oil servicing company for 6years as a Sales Engineer before she started her Events Management and Planning outfit Laureche Events. She is the brain behind Excuse Me Laugh, an annual Easter comedy show. This show, which holds every Easter Monday, hosted Port Harcourt for the 7th edition in April last year.
A member of a defunct all-girl group Colors, she became the Music Director in her 3rd year and was ordained the Fellowship Pastor by her 4th year while she was in school. She has shared the stage with other Gospel greats including Sinach, Eben, Buchi, Frank Edwards, Joe Praize, Chris Shalom and Samsong. She released her debut album “More than Enough” on the 1st of December 2014.
Laureche is elated about the release of the video for the song “You Reign” as she believes it is yet another avenue to accomplish her vision of touching lives with the message of the Gospel through her gifts.
Watch video below:
DOWNLOAD VIDEO
Connect:
Twitter: @thereallaureche
Facebook | Instagram: @UcheEtiaba 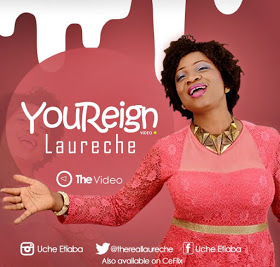