MUSIC DOWNLOAD: Folabi Nuel & New Harmony – Everlasting || @folabi_nuel
Following the success of his debut single “Heaven and Earth” released in January, 2015, Folabi Emmanuel (now known as Folabi Nuel) returns with his sophomore single, a soulful song titled “Everlasting”.
‘Everlasting’ is a song of sincere worship to God. The single, recorded by Wilson Joel is now available on iTunes and also for FREE download. The singer/songwriter, instrumentalist and music Director recently unveiled his new group “New Harmony”.
DOWNLOAD AUDIO
ABOUT FOLABI NUEL
His official debut single ‘Heaven and Earth’ peaked at #1 on Rhythm 93.7FM’s weekly ‘Holy Holla’ radio show for four straight weeks. His music ministry took shape fully after being appointed music director of the Fathers Favourite Ministry (aka Fathers House) in 2014.
He has since then worked and shared stages and platforms with great gospel music personalities such as Nosa, K’ore, PITA, Okey Sokay, Provabs , to mention a few.
The young worshiper recognized music’s impact at a very tender age, treasuring the gift and recognizing it as a call to ministry. At only 13 years old and without formal training he was already coordinating the schools official choir back in high school and leading them to greater heights.
Folabi Nuel is a music minister with a difference and a genuine mandate to bring God’s people to the consciousness of who He is and to draw them closer in relationship with him.
Connect with Folabi Nuel on Twitter and Instagram – @Folabi_Nuel 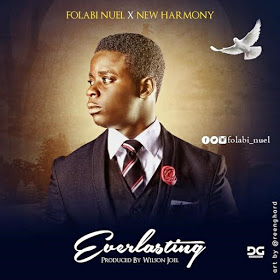 DOWNLOAD Mp3 Grace U. Ukpong ~ Turn your Problems into Mary