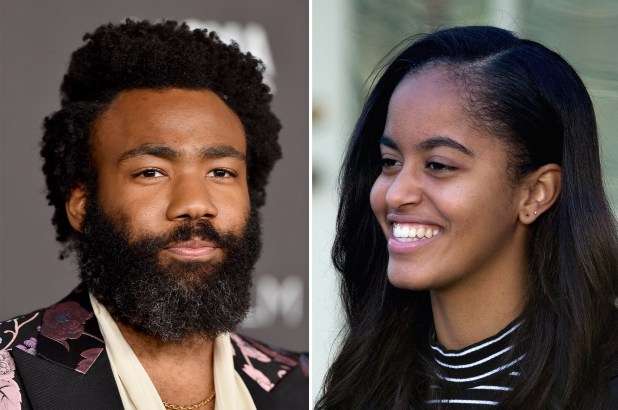 Malia Obama has reportedly signed on to write for an upcoming streaming series helmed by Donald Glover, who just inked an eight-figure production deal with Amazon Prime.

Glover’s new pact with the streaming platform will see the Emmy and Grammy winner produce a number of as-yet undeveloped television projects, such as a potential new series dubbed “Hive.” He tapped writer Janine Nabers (“Watchmen”) to help lead the team which includes the former First Daughter of the United States, the Hollywood Reporter first reported.

Although the plot is tightly under wraps, sources have revealed that “Hive” will center around a Beyoncé-like character.

Malia, 22, is a student in Harvard University’s class of 2021, and this would mark her first professional entertainment gig after several A-list internships, including a stint on the set of HBO’s “Girls” in 2015.

News of the high-profile addition to Glover’s writers room comes only days after it was announced that the 37-year-old “Atlanta” creator and Phoebe Waller-Bridge, the brain behind the award-winning series “Fleabag,” would come together on-screen for a remake of 2005’s “Mr. & Mrs. Smith,” also in partnership with Amazon Studios as well as New Regency.

Amazon declined to comment. Reps for Glover, also known as recording artist Childish Gambino, did not immediately respond to The Post’s requests for comment.

Anglican Devotional 24 September 2022 – God’s Promises Are Sure, Stable And Concrete

TREM Devotional 24 September 2022 – Your Steps Are Ordered By God

Andrew Wommack Devotional 14 September 2022 – Righteousness Depends On God, Not On Self