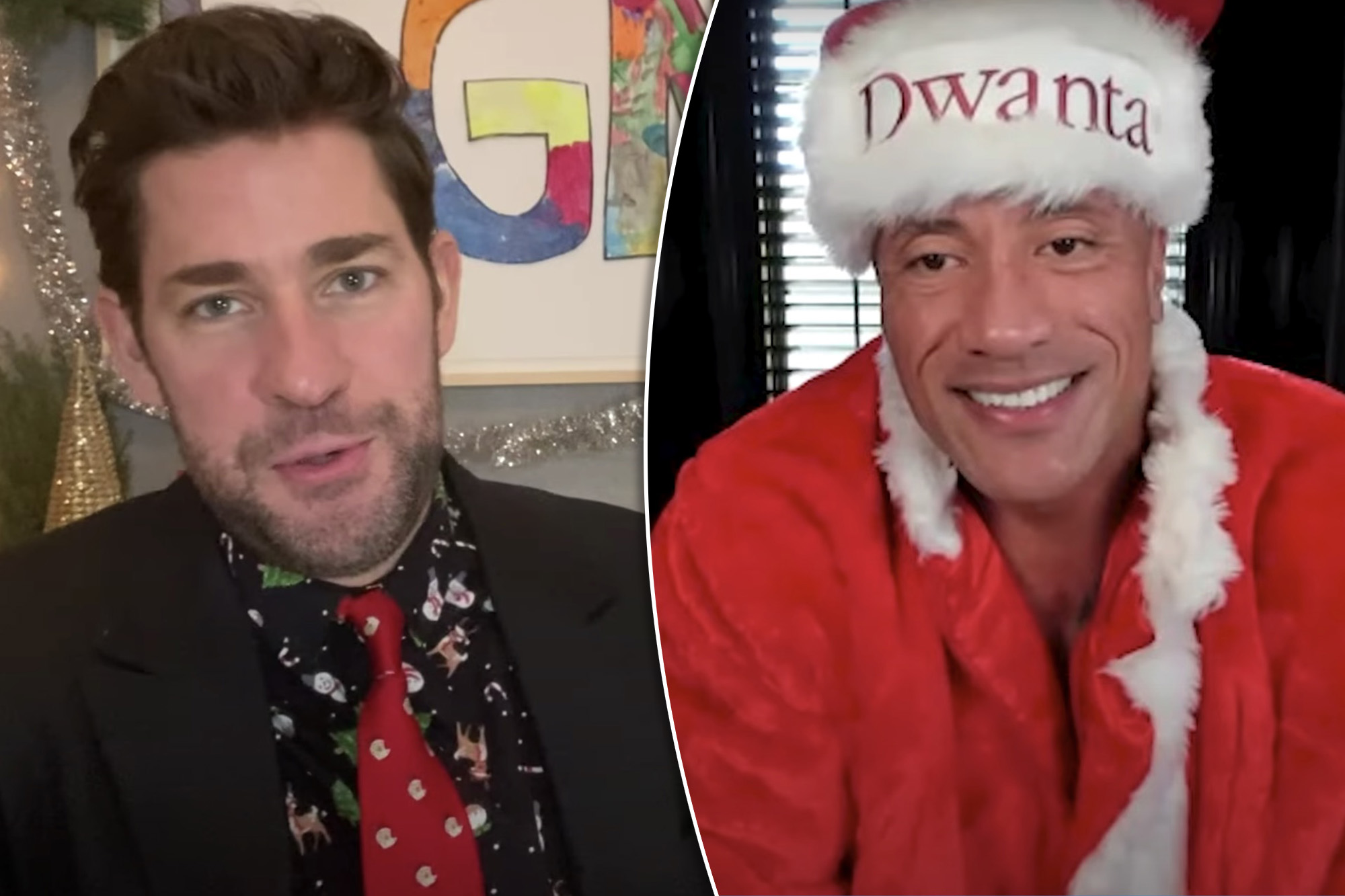 John Krasinski’s “Some Good News” is back from summer vacation — and he brought Dwayne “The Rock” Johnson, George Clooney and millions of bucks with him.

The actor and “A Quiet Place” director, 41, rebooted his popular YouTube series — which launched its three-month run at the outset of the pandemic in March — with a “Holiday Special” on Sunday night.

Johnson donned a “Dwanta Claus” costume to help Krasinski announce that sponsor FedEx had donated a whopping $5 million to the Toys for Tots holiday toy drive.

The duo also welcomed Jay Abel, a widowed dad who had previously asked Johnson for a retweet of his “nerdy” eBay listings so he could give his kids a Christmas this year.

“Your story is my favorite of the holiday season. It’s like superdad stuff,” Krasinski told the single dad of two from Copperopolis, California, whose wife died three years ago.

“I’m just trying to be what I expect of a father. I’m not doing nothing special,” Abel told Krasinski and Johnson. “I’m a collector, they’re my favorite stuff — but my children are more important than me.”

But The Rock had a surprise for the dad who was struggling to find employment during the COVID-19 pandemic.

“Take all of your stuff off of eBay because Dwanta Claus is going to take care of all of that stuff, man,” said Johnson, who also promised to buy all the items on Jay’s kids’ list, including the new Xbox Series X for his 11-year-old son and L.O.L. Surprise! O.M.G. dolls for his 8-year-old daughter.

The former pro-wrestling superstar also invited the family to the DC Universe in Southern California when it’s safe to go and promised Jay he would give him a leather-bound, signed script to the “Black Adam” movie in which he’s starring.

The episode also featured Clooney, 59, in the recurring “weatherman” bit, a role performed by fellow Hollywood A-listers such as Brad Pitt earlier this year.

Sunday’s special marked a feel-good comeback of sorts for the brand after Krasinski took it on hiatus in May. At the time, fans slammed Krasinski and his show — which racked up millions of YouTube views — for selling to ViacomCBS for an undisclosed sum after a heated bidding war. Krasinski was labeled a “sell-out.”

“I was only planning on doing eight of them during quarantine,” he told Wilson, 54, in the interview. “I have these other things that I’m going to be having to do very soon, like ‘Jack Ryan.’ More than that, writing, directing and producing — all those things — with a couple of my friends, was so much.”

His involvement “wouldn’t be sustainable with my prior commitments,” Krasinski said. “I would love to keep doing the show from my office forever, but it wasn’t sustainable.”

He assured fans that his wholesome spin would be imprinted on the reboot, as he will be involved with the creative process in some capacity.

“We have a lot of really fun stuff planned and I can’t wait to dig in,” he told Wilson. “I’m going to be a part of it whenever I can, and I’m going to host a couple episodes and bring on a different community of people. We’re really, really excited about it.”

Although regular episodes stopped production in May, the “Some Good News” brand — which boasts more than 2.25 million subscribers on YouTube — has since expanded to Twitter and Instagram with a steady flow of social media posts.

Ariana Grande’s ‘Excuse Me, I Love You’ engages Netflix masses

Nathaniel Bassey Gospel Worship Songs ~ See What The Lord Has Done, There Is A Place…

It can only get Better ~ Kalusian ft. Shanta Fuentes ~ Latest Gospel Music Video ~…